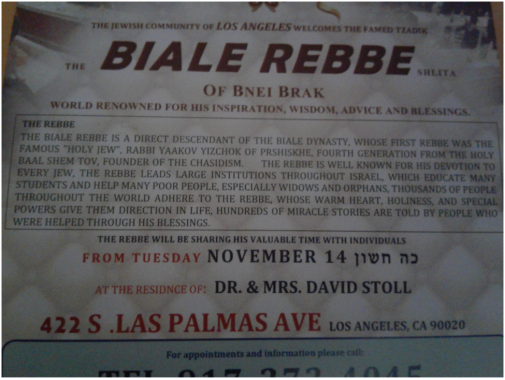 The Biale Rebbe is a Chasidic leader who has gained in popularity in recent times. This is evidenced by the many people, some of whom are decidedly not Charedi, who turn to him for advice and guidance. He, like other Chasidic Rebbes who travel around, visit a city amidst great fanfare. Part of that is the posting of advertisements to announce and showcase the Rebbe. Enclosed is one of these advertisements. In case you have difficulty reading the picture, let me type the blurb:

The Biale Rebbe is a direct descendant of the Biale dynasty, whose first Rebbe was the famous “Holy Jew” Rabbi Yaakov Yizchok of Prshikshe, fourth generation form the holy Baal Shem Tov, founder of the Chasidism. The Rebbe is well known for his devotion to every Jew. The Rebbe leads large institutions throughout Israel, which educate many students and help many poor people, especially widows and orphans. Thousands of people throughout the world adhere to the Rebbe whose warm heart, holiness, and special powers give them direction in life. Hundreds of miracle stories are told by people who where helped through his blessings.

Is the Rebbe  devoted to every Jew on account of his warm heart? Sure. Does he have thousands of followers throughout the world? That’s impressive, but believable. But why also insert that he has performed “hundreds of miracles”? Isn’t that laying it on a bit thick?

Elijah Judah Schochet wrote some time ago an article in Hakira touching on just that. It is a pointed article entitled, “Hasidism and the Rebbe/Tzaddik: The Power and Peril of Charismatic Leadership”.

He writes what is plain for all to see, “The outcome is clearly a success story for Hasidism… A good case could be made that Orthodox Judaism has become “hasidized”…”

But, “However, at what price has this victory been achieved?”

Partly, widespread belief in the fantastic, Harry Potter-like powers of the Rebbe. The Baal Shem Tov was said to be able to: make himself invisible, walk on water, reads people’s minds, predict the future, cure the sick, revive the dead , and talk to the dead. And many other things besides.

It should therefore not be surprising that the Biale Rebbe, among other Rebbes, can claim, or have claimed on their behalf, the ability to perform hundreds of miracles. This is a well-established Chasidish worldview.

But what should also be well established are the Misnagdim. They seem to be awfully quiet.