Rashbi’s Yahrzeit and a Printing Mistake

If one looks in the Shulhan Arukh or Tur, as well as various early commentaries, one will not find any other reason as to why there should be simcha on Lag Ba’Omer, other than the students of R. Akiva stopped dying on Lag Ba-Omer. How then, did the connection between Meron, Rashbi, and Lag Ba’Omer come about?

The most well known explanation to the connection, is that Rashbi died on that day, as he was one of the students of Rebbe Akiva. Assuming for a moment that this is factually correct, it is quite strange that we celebrate Rashbi’s death. We don’t celebrate the yarzheit of Avraham Avinu, Moshe Rabbeinu, David HaMelech, or any other great people with bonfires. As we look back in history we will see the opposite, we always fasted on the day of a yarzheit. Even today, our minhag is not to make a family wedding on the day of a yarzeit although we stopped fasting on those days.

Chazal, nor any of the Rishonim mention Rashbi dying on Lag Ba-Omer, and as a general rule we do not make any form of Yom Tov on a day that is not mentioned in Chazal. This issue was addressed by the Chasam Sofer in his teshuva and because of this, he too (among others, including the Sh’oel U’meshiv) was not in favor of going to Meron to celebrate the way Lag Ba-Omer is celebrated as a Yom Tov with singing and dancing. He writes “that I do not have to be there with them”. Here is his T’shuva – Yorah Dayah 233:

So what is the source that Rashbi died on Lag Ba-Omer?

What appears to be the source is Reb Chaim Vital Z”L quoting in the name of the Rebbe, the Arizal, found in his sefer Peri Etz Chaim. Reb Chaim Vital states that Rashbi died on Lag Ba-Omer, as he was one of the students of R. Akiva who died during the Sefirah. In truth, it is a just a mistake. The source of this mistake was based on a simple printing error in one edition of the Peri Etz Chaim printed in Dubrowno 1802 (p. 124).  Here is a copy of the printing mistake: 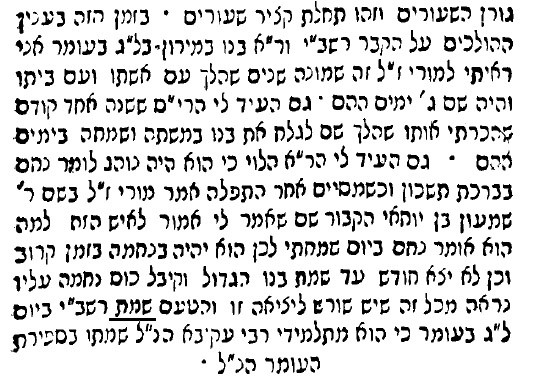 In the first printed edition of the Peri Etz Chaim, which was printed in 1785 (p. 101), it does not say that at all. Instead of saying “sh-meis” (that he died) it says samach (was joyous). The letter “ches” was apparently confused by the typesetter/platemaker in Dubrowno (or he might of been tired that day) for a “tav” causing the mistake!

Here is a copy of the ORIGINAL Prei Etz Chaim:

Recently, the Sefer Shaar Ha-Tefilah was printed from a manuscript of R. Hayyim Vital’s actual handwriting, and in that as well, the passage states that it was the day of simchas Rashbi, not the day he died.

The Chida in his work Birkhei Yosef, writes that Rashbi died on Lag Ba-Omer. But in a later work of his, Ma’aret Ayin, printed in 1805, he writes that the Prei Etz Chaim is full of mistakes and this statement regarding Lag Ba-Omer and Rashbi’s death day is one of them. So the Chida’s conclusion is that it is not a reference to Rashbi’s day of death at all. This conclusion is accepted by later authorities.

The Lubavitcher Rebbe Z’L wrote in a letter to Reb Zevin, that there is a printing mistake in the Peri Etz Chaim.

Another example of an early source who quotes the Arizal about Lag Ba-Omer but makes no mention of it being his yarzheit, can be found in the Ateret Zekenim, first printed in the side of the Shulhan Arukh in1702 (it was written much earlier). He also cites the story of the Arizal:

Here too we see a version of the story that has nothing about it being the yahrzeit of Rashbi. What we see is, the Arizal telling the person saying ‘tacneh” on Lag B’Omer he did not do right – since it is a day of Simcha.

In short it is quite amazing that the whole source for Lag ba-Omer being the day of Rashbi’s death is based on a printing mistake found in only one version of the Prei Etz Chaim.

Returning to the origins of going to Meron in general, from sources of famous travelers such as R. Binyomin Me-Tudela in the 1170s, R. Pesachyah Me-Regensburg, but in these early sources they make no mention of them even going to Rashbi’s Kever. In their descriptions of Meron they only mention the Kevarim of Hillel and Shammai who are also buried in Meron. They all mention davening in the Shul named after Reb Shimon Bar Yochai. The town’s main shul was named after Rashbi, as Meron was the place where Rashbi set up his yeshiva after he came out of the cave. Originally, the place of his yeshiva was called Tekoa that most historians agree is now the village of Meron. The first source that we find that mentions going to Rashbi’s Kever is from the twelfth-century in the travels of R. Yaakov HaKohen. In the beginning of the fourteenth century, however, a student of the Ramban mentions going to the kevarim of Hillel and Shammai in Meron on a specific date in the month of Iyar, on Pesach Shnei. We have other early sources that mention going to those kevarim on Pesach Sheini. In the letters of R. Ovadiah M’Bertinoro (1488) and the travels of R. Moshe Basola (1521-1523), we also find mention of going to Meron to visit the kevarim of Hillel and Shammai on Pesach Sheini. From many of these sources, we see that the reason they went, was to daven for water, and that at times, water would miraculously appear from the caves. However, while we have many accounts of going to Meron even during the month of Iyar none mention going to the Kever of Rashbi during that time of year.

In the famous letters of Reb Ovadiah M’Bartenura where he wrote back home to his family, describing his trip to Eretz Yisroel in 1488 -1490. He describes Meron as follows:  We came to the village and saw the cave of Hillel and his twenty four students. Next to this, we entered a cave where twenty two Torah scholars are buried. I was told they were the students of Reb Shimon Bar Yochai in Acre. Afterwards I saw the burial site of Shamai and his wife. I also saw the Shul of R. Shimon Bar Yochai. He makes NO mention of his grave. All this is interesting, why is his Kever not mentioned by many??

We have many sources that clearly demonstrate that the Mekubelei Tzefat would go to Meron to the Kever of Rashbi a few times during the year to learn Zohar. However, the first source we have for someone going to Rashbi’s kever specifically on Lag Ba-Omer, is the Talmdim of the Arizal, who say that the Arizal once went to the Kever of Rashbi on Lag Ba-Omer while still living in Egypt and visiting Eretz Yisroel. When recording this testimony, R. Hayyim Vital writes, that he is not sure if this occurred before the Arizal was well versed in Kabbalah or after. The Arizal lived most of his life in Cairo, but did make occasional trips to Eretz Yisroel. He finally moved to Tzfas, but only lived there a little over a year before he was nifter at age 38.

In sum, the above indicates that there are early sources for people going to Meron during the month of Iyar, on Pesach Sheni, to the Kevarim of Hillel and Shammai. The Mekubelei Tzefat went to Rashbi’s Kever throughout the year.

All this is not to come to a conclusion that Rebbe Shimon Bar Yochai is somehow diminished in any way, shape or form. He was from the greatest Tanoyim and his Meseras Nefesh for Torah together with his learning will be honored and learned forever. Rashbi holds a special place in annals of Jewish history. All we are questioning – is Lag B’Omer his real yarzheit or not?

Still go and have a good time – we Yidden deserve more good times after all we have suffered and been through the ages. There is nothing wrong with going to Meron even if it is not really Rashbi’s yarzheit. May his memory be blessed forever.